Monday night, the House of Representatives hosted members of the Vietnam Veterans of America (VVA), Chapter 995 from Jackson, Tennessee.


During their visit to the House chamber, VVA members conducted the 13 Folds of the U.S. Flag Ceremony — a flag folding ceremony performed at funeral services of the men and women who have served our country. They also played Taps, which is a bugle call played at dusk, during flag ceremonies, and at military funerals by members of the United States armed forces.


The VVA was originally created to serve Vietnam veterans. They now preside at any funeral service involving our nation’s heroes, offering their skills to families who have lost loved ones and who desire to have their loved one buried with full military honors.


It was an absolutely amazing event.  House Republicans expressed our gratitude to the VVA, along with all of the organizations across the state that support Tennessee military families.


House Bill 15 exempts a new or used vehicle that is sold, given, or donated to a disabled veteran or service member from the sales and use tax. I was very proud to cosponsor this bill and support it in Finance Committee.


House Bill 15 is the latest in a series of Republican-led initiatives designed to support Tennessee veterans and military families. During the 2017 legislative session, House Republicans fought to reduce the amount of property tax owed by veterans, elderly, and disabled homeowners.

Legislation designed to improve the quality of care for Tennesseans who are battling addiction gained support this week in Nashville.


As part of the ongoing efforts of House Republicans to address Tennessee’s opioid and drug crisis, House Bill 1929 — known as the Stopping Addiction & Fostering Excellence (SAFE) Act — ensures that patients who utilize recovery houses receive high quality care that empowers them to end the cycle of addiction.


The SAFE Act enables providers at these facilities to focus their efforts on implementing more customized and targeted treatment plans for patients. Additionally, House Bill 1929 streamlines operational guidelines while strengthening partnerships between the facility and its local municipality.


Tennessee’s opioid epidemic claimed the lives of more than 1,600 Tennesseans in 2016 alone. Every day in our state, at least three people die from opioid-related overdoses. This is more than Tennessee’s daily number of traffic fatalities.


While the federal government has only just commenced conversation about the opioid epidemic, Tennessee leads the way in fighting the situation here at home. In addition to House Bill 1929, House leaders are also moving forward with other major pieces of opioid legislation to combat the state’s opioid problem head on, including the Tennessee Together plan.


Tennessee Together is a multi-faceted plan comprised of legislation, $30 million in funds through Governor Haslam’s proposed 2018-2019 budget, and other executive actions to battle opioids through the three major components of prevention, treatment, and law enforcement. The plan incorporates recommendations made by Speaker Beth Harwell’s Ad Hoc Task Force on Opioid Abuse.

House Republicans this week introduced a measure aimed at giving Tennesseans a fresh start in life by utilizing the state’s available education opportunities.


House Bill 1780 permits an individual who has a Class E felony conviction to apply for a records expunction immediately after he or she earns a certificate or degree under the Tennessee Reconnect program.


Passed in 2017, the Tennessee Reconnect program offers all adults without a degree access to community college tuition-free and at absolutely no cost to taxpayers.


Currently, citizens who have paid their fines, court costs, and restitution are eligible to apply for a Class E felony records expunction after a five year waiting period. House Bill 1780 keeps current stipulations for Class E offenders in place, but reduces the required wait time to apply for records expunction to as little as 12-18 months in some instances.


This reduction provides a fresh start for residents, decreases recidivism, and minimizes use of taxpayer funds to cover incarceration costs.


According to the Tennessee Department of Correction, instances of recidivism have decreased by more than three percent statewide from 2010-2016. However, the state’s recent opioid crisis is leading to a larger number of drug related arrests, as well as repeat offenders.


A survey conducted by the Vera Institute of Justice estimates that the state spent $723,680,760 on prison expenditures in 2015 alone.


While House Republicans have worked to reduce recidivism in Tennessee, citizens still have to bear the high expenses of incarceration. This new initiative not only saves taxpayer money, but also encourages those who desire a fresh start to take advantage of the state’s many education opportunities so they can capitalize on a greater number of high quality jobs currently available.

Initiative displays “In God We Trust” in prominent locations within schools


My bill that calls for our national motto — “In God We Trust”— to be displayed in schools across Tennessee was introduced this week in Nashville.


House Bill 2368 enacts the National Motto in the Classroom Act. It requires each local education agency across the state to display “In God We Trust” in a prominent location within Tennessee’s schools.


“In God We Trust” has served as the official motto of the United States since 1956. It first appeared on the two-cent penny in 1864 and on paper currency in 1957.


I was so proud as during his recent State of the Union Address in front of Congress, President Donald Trump reminded the nation’s lawmakers and all citizens that the foundation of American life is faith and family, not government and bureaucracy. President Trump also emphasized to the congressional and national audience that our country’s motto has been and still remains “In God We Trust.”


Supporters of the legislation agree that The National Motto in the Classroom Act is an opportunity to help future generations of students better understand the importance of faith in the narrative of Tennessee and the nation.


At Life Church on SR109, on Tuesday, Feb 27th, at 6:00 pm TDOT will hold a neighborhood forum to provide information on the widening of 109. The Q&A style event will include TDOT staff and contractors. The meeting will last two hours.

Recently a constituent stated to me that the increasing price of gas was caused by the gas tax in the Improve Act.  I explained that it was truly market conditions affecting the price of gas and sent her an article that backed me up.  She insisted that the .04 cent per gallon increase to .24 cents has multiplied the effect.


It was then that I realized that she did not understand that the gas tax is an excise tax which means that the amount of tax we pay at the pump is not affected by inflationary market conditions.


The gas tax is charged by the number of units purchased not the sales price, I explained.  Therefore, since I normally purchase 14 gallons of gas a week at this time of year, I will pay the same amount of tax whether the price of gas is $2.00 per gallon or does something really scary like go up to $5.00 per gallon.


Excise taxes are generally used for commodities like gasoline whose price tends to be unstable; it helps to cushion against the harmful effects of large price fluctuations.  No matter the price – the tax is by the number of units purchased.


A sales tax on the other hand, is a transactional tax where we are charged a percentage of the price of the item.  That is why we feel the effects of inflation on consumer goods so greatly - we pay more taxes on each item as the price increases.


That is also why lowering the food tax through the Improve Act was such a great help for Tennesseans; especially the poor, elderly and young families.  Our ultimate goal is to get rid of the food tax entirely - we are just .04 cents away from that goal.

The Governor’s Infographic on His Opioid Bill 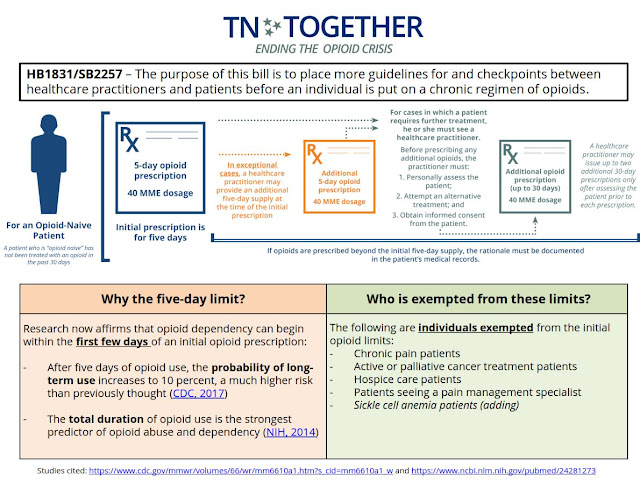 Competition with neighboring states is a challenge


Tennessee manufacturing employment inched up for a sixth straight year, according to new data collected by Manufacturers' News Inc. (MNI) . MNI reports the state added 3,251 jobs over the past year, a 1 percent increase, and is now home to 6,517 manufacturers employing 382,972 people . Manufacturing employment in Tennessee has grown at a steady clip over the past six years, rising 5 percent since October 2011.


Manufacturing job gains in Tennessee were spread across multiple sectors and were strongest in furniture/fixtures, rubber/plastics and electronics. Primary metals, textiles/ apparel and food processing each grew by 3 percent, while fabricated metals and paper products grew by 1 percent. Industrial employment losses were reported in the stone/clay/glass, industrial machinery and printing/publishing industries. All other industries remained stable.

The Mt. Juliet Republican Women is tomorrow night, February, 12 at Courtney's Restaurant.  Arrive at 6pm for food and fellowship or 7 pm for the meeting.  We will have installation of officers as follows:

We are pleased to have Yvonne Hunter, our Area 5B Vice President do the installation.