Tennessee Legislature Kicks Off Second Half Of 110th General Assembly

The Second Regular Session of the 110th General Assembly officially convened this week in Nashville, with lawmakers gathering to continue the work they were elected to perform by the people of Tennessee.


This kick off by the state legislature marks the 26th time that the General Assembly has met in a Second Regular Session, the first time being 1968 with the 85th General Assembly.


Immediately prior to then, the General Assembly convened on the "first Monday in January, next ensuing the election,” meeting in odd numbered years only.


The practice of meeting every other year was proposed to be changed by the 1965 Limited Constitutional Convention, and was officially approved by voters on November 8, 1966. The change took effect with the 85th General Assembly, with the legislature meeting in both odd and even numbered years since that time.

The bill filing deadline for this year has been set for Thursday, February 1, meaning all proposals, except bills of local application, must be filed by that deadline in order to be considered in the 2018 legislative session.


As the 2018 legislative session officially begins, House Republicans have an array of issues on the table to be discussed and debated in Nashville. The work for 2018 will build on last year’s momentum and accomplishments that saw the passage of a fiscally conservative balanced budget, tax cuts for all Tennesseans, investments in the state’s Rainy Day Fund, drastic improvements in education, and multiple pieces of legislation to reduce regulation and help invigorate Tennessee’s private sector.


This year, House Republicans will focus on the state’s ongoing opioid and drug epidemic which claimed the lives of more than 1,600 Tennesseans in 2016 alone. Following the work of Tennessee House Speaker Beth Harwell’s Ad Hoc Task Force on Opioid Abuse, Republican lawmakers begin the second half of the 110th Tennessee General Assembly with official recommendations that will help shape legislative initiatives related to the state’s opioid problems.


Republicans will also focus on welfare reform in 2018, including building on new initiatives that reinstate the work requirement for able-bodied adults who rely on the state’s Supplemental Nutrition Assistance Program (SNAP) for assistance. By reinstituting work requirements, approximately 58,000 able-bodied adults without dependents across Tennessee who are not currently meeting the work requirement but still receive assistance will now be able to capitalize on an overabundance of jobs in order to secure meaningful employment.

Additionally, House members will work to reform the state’s juvenile justice system. Last fall, the Joint Ad Hoc Blue Ribbon Task Force on Juvenile Justice released its findings following an exhaustive study of the state’s current system. The overall goal of the task force was to shrink the number of nonviolent youth placed out of their homes and in turn save incarceration costs for the state.


Finally, House Republicans remain committed this year to supporting legislation that will further advance Tennessee as an attractive destination for businesses and families.


Under GOP leadership, Tennessee saw record low unemployment rates in 2017. As of December, statewide unemployment was 3.1 percent — a full percentage point lower than the national average. These statistics are in addition to the nearly 400,000 net new private sector jobs that have been created in Tennessee since Republicans took control of the legislature in 2011.


State Representative Kevin Vaughan (R–Collierville), who was elected during a special election in the summer of 2017 after the conclusion of the first half of the 2017-2018 General Assembly.


State Representative Clark Boyd (R–Lebanon), who was appointed to the House by the Wilson County Commission following the election of Mark Pod to the State Senate.


Each new member of the General Assembly must take the oath of office before proceeding with regular business. The oath is highlighted below:

House Republican Members, 74 strong, gathered for a group photo on the steps of the Capitol. 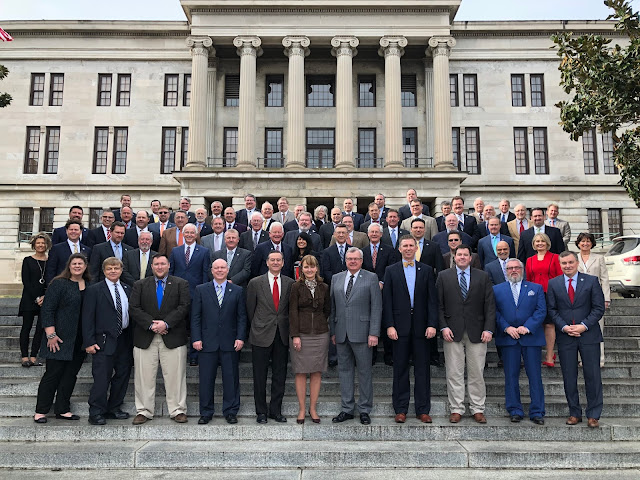 
Passed in 2014, Amendment 1 empowered the Republican-led General Assembly to amend and repeal state laws related to abortion and restored the right of Tennessee citizens to have a voice regarding the state’s pro-life stance.


Amendment 1 initially passed by 53 percent of voters in November 2014, but was later challenged by a pro-abortion group and a federal judge in Nashville. With this new ruling, Amendment I has been deemed constitutional by the courts.  It is thought to be unlikely that the Supreme Court will take up the case if appealed.


More votes were cast on Amendment 1 than were cast in the 2014 governor’s race — a clear sign that Tennesseans have been and remain passionate about pro-life issues.


In recent years, House Republicans have fought to protect the state’s unborn children. During the 2017 legislative session, the legislature passed the Tennessee Infants Protection Act to prohibit abortions after 24 weeks, except in the case of medical emergency. The legislation also holds physicians who perform late-term abortions accountable for their actions.


With this new ruling, the uncertainty surrounding the people’s 2014 approval and ratification of Amendment 1 can officially be put to rest.


Kelley and Lynn Elected President and Vice President of the Republican Women of Mt. Juliet Respectively


The Republican Women of Mt. Juliet have held a new election and Pam Kelly, a resident of Providence in Mt. Juliet, will serve as President of the Club and Rep. Susan Lyn will Serve as Vice President.  “I could not be more proud to serve with Pam.  She has the leadership skills to carry our club forward into the elections where we Republican women are the backbone for our candidates.  We are there to support them and uplift them all the way through the November General Elections.”  Stated Lynn.


In December, the Republican Women of Mt. Juliet elected Representative Susan Lynn to serve as their 2018 President.  However, two members of the Wilson County Rep. Party executive committee objected to Lynn serving as President because she might obtain a Primary opponent in the Spring.  In an article in the Lebanon Democrat over the weekend Lynn stated “Some battles are not worth fighting.” So, Rep. Lynn has asked the MJRW to elect a new president.  “We continue to work toward continued Republican unity.  Earlier this month when the Lebanon Republican Women suddenly decided to hold their meeting in Mt. Juliet, on the same night and at the same time as our club’s meeting, I called the Lebanon President and asked their club to join our group for the evening. They declined but it was a sincere effort towards unity.”


As to the actions of the county party Lynn stated “Unfortunately, weak leadership has fomented factions within the county party.  I understand very well how President Trump feels being attacked by the establishment all the time.  The Lebanon Democrat’s article explains what happened very well.  I have heard from many, and people read between the lines – they understand what is going on.”  Ended Lynn.