(NASHVILLE) — State Representative Susan Lynn (R-Mt. Juliet) today announced funding from the Tennessee Department of Transportation (TDOT) for construction on a portion of Interstate 40 in Wilson County.
The project will widen a portion of the interstate between State Route 109 and Interstate 840 — part of TDOT’s three-year transportation program. Funding for the project was made possible through the passage of the IMPROVE Act in 2017.
The IMPROVE Act establishes a dedicated source of funding in order to cut down on the reported $10.1 billion backlog of road projects currently on Tennessee’s books. Additionally, it has provided the largest tax cut in Tennessee history — the food tax, the Hall Income Tax and property taxes for low-income seniors and disabled veterans as well as a reduction in the Franchise & Excise Tax which has attracted new business to our state.
“I am pleased that construction will soon begin. This latest project would not be possible had we not passed the IMPROVE Act last year,” said Representative Lynn. “This will ease congestion, and also improve safety, and the quality of life for our residents. I am eager to see this project completed in the next few years.”
Last month, Lynn and TDOT officials celebrated the beginning of construction on a 7-mile stretch of State Route 109 from just north of U.S. 70 to just south of the Cumberland River — the culmination of several years of hard work led by Representative Lynn in the General Assembly. This project was also funded through the IMPROVE Act.

Please visit my blog to take the 2018 legislative survey on current issues before the General Assembly; susan-lynn.blogspot.com.  Issues include the states amending the US Constitution, medical cannabis oil, the National Motto Bill and many others.

Governor Signs National Motto Bill
From the Tennessee Prayer Alliance
We are pleased to announce that the National Motto in the Classroom Act passed by an overwhelming majority in both chambers, and was signed by Governor Bill Haslam on April 2nd. The TN State House passed the bill with 81 Ayes and 8 Nays while the TN State Senate passed it by 28 – 0.
As introduced, the "National Motto in the Classroom Act," requires each local education agency to display the national motto, "In God We Trust," in a prominent location in each school. - Amends TCA Title 49, Chapter 6. Go here to read the entire text of the bill. You may wish to say “thank you” to the sponsors, Rep. Susan Lynn and Sen. Paul Bailey. There were many co-sponsors as well. We are grateful that so many legislators signed on to this important piece of legislation.
It is important to note that many students no longer know what our National Motto is, and therefore legislation such as this is necessary and significant. Stay tuned for more info and practical ways that this will be implemented in each school district.

Justin Wilson, Tennessee State Comptroller, just released a new web page containing multiple maps which allow users to view the data in a variety of ways, by:
All the maps are interactive – zoom in, zoom out – and searchable by legislator, school district, and school. OREA updates the maps each year with the latest data from the Tennessee Department of Education.
Click on the link below to open the Mapping Tennessee Education application. Summaries and legends are included to the left of each map and include links to additional OREA resources, including our Defining Tennessee Education Glossary and BEP Calculator.

House Republicans joined with Governor Bill Haslam this week to announce the application process remains open, until April 15, for adults to enroll tuition-free this fall at a community or technical college through Tennessee Reconnect.

Following the first week of the application process being open, over 4,000 applications were submitted — a record start in helping adults who want to go back to school to advance their futures.

Tennessee Reconnect builds off the groundbreaking Tennessee Promise program — which provides high school graduates two years of tuition-free community or technical college — by establishing a last-dollar scholarship for adults to earn an associate degree or technical certificate free of tuition or mandatory fees.

Both Tennessee Reconnect and Tennessee Promise are programs under the Drive to 55, an initiative spearheaded by lawmakers to increase the number of Tennesseans with a postsecondary degree or certificate to 55 percent by 2025. Studies show that by 2025, at least half the jobs in Tennessee will require a college degree or certificate.

Early results of the Tennessee Promise program show that students participating in the program are succeeding at higher rates than their peers. Tennessee is the first state in the nation to offer all citizens, both high school graduates and adults, the chance to earn a postsecondary degree or certificate tuition-free.

Those interested in applying for Tennessee Reconnect can do so by following these 4 simple steps:

To be eligible for Tennessee Reconnect, a student must not already hold an associate or bachelor’s degree, must be a Tennessee resident for at least one year, and be determined as an independent student on the FAFSA.

For additional information about how to get involved with Tennessee Reconnect, click here.

The House of Representatives this week approved legislation that will remove barriers for Tennesseans who are seeking a fresh start in life.

House Bill 2248 — also known as the Fresh Start Act — is designed to further reduce Tennessee’s recidivism rates by providing a pathway to employment for citizens who are returning to their communities following incarceration and who desire a fresh start in life.

Currently, Tennessee requires licenses for 110 different jobs; many impact those seeking manual labor or other industrial-related work. State licensing boards can deny a license for these professions to individuals with past criminal records, including lower-level forms of crime classified as misdemeanors.

As passed, House Bill 2248 requires that denials and refusals for license renewals based on a prior criminal conviction are only allowable when the criminal offense directly relates to an individual’s ability to perform duties associated with the occupation or profession they are seeking a licensure for — excluding violent felonies.

According to the Council of State Governments (CSG), nearly 10 million U.S. adults return to their communities following incarceration every year; upon their release, many face significant barriers to securing employment. CSG estimates that occupational restrictions can result in 2.85 million fewer people employed nationally and also raise consumer expenses by more than $200 billion.

As part of the ongoing efforts to address Tennessee’s opioid and drug crisis, House Bill 1929 — known as the Stopping Addiction & Fostering Excellence (SAFE) Act — ensures that patients who utilize recovery houses receive high quality care that empowers them to overcome their battles with addiction.

The SAFE Act enables providers at these facilities to focus their efforts on implementing more customized and targeted treatment plans for patients. Additionally, the legislation streamlines operational guidelines while strengthening partnerships between the facility and its local municipality.

Tennessee’s opioid epidemic claimed the lives of more than 1,600 Tennesseans in 2016 alone. Each day in the state, at least three people die from opioid-related overdoses. This is more than Tennessee’s daily number of traffic fatalities.

As lawmakers continue work to help keep more citizens moving along a pathway away from dependency towards complete recovery, House Bill 1929 creates additional tools to assist efforts to end the cycle of addiction and ensure better care at Tennessee recovery facilities.

An initiative designed to cut regulations and create jobs is moving through the Tennessee General Assembly’s committee process.

This week, members of the House Finance, Ways, & Means Committee voted to advance House Bill 571, also known as the Primacy and Reclamation Act of Tennessee. The measure restores sovereignty over mining and reclamation operations and enables Tennessee to stop regulations that restrict job growth within the state’s mining industry.

If passed, House Bill 571 is expected to create more than 1,200 new mining jobs.

The legislation will next be heard by members of the House Calendar & Rules Committee.

Additional information about the initiative is available by clicking here. 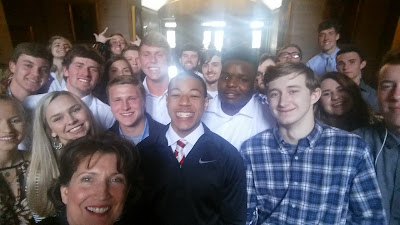 The measure comes as a group of Tennessee dairy farmers recently expressed concerns over the future of their businesses due to contract issues and falling profits. In fact, Dean Foods recently informed approximately 100 farmers nationwide that it would stop buying their milk as of May 31.

House lawmakers have helped lead efforts to assist the state’s dairy farming industry by supporting the “buy local” mantra and hope this new legislation will help encourage Tennesseans to rally around the local dairy industry.

Ancient Scrolls at the State Capitol

At the state Capitol this week there was a once in a lifetime opportunity to view ancient Biblical scrolls - as old as 600 years old. The scrolls survived the Holocaust and were airlifted out of Yemen in the late 1940's. It was a beautiful display - I will post as many photos as I can. 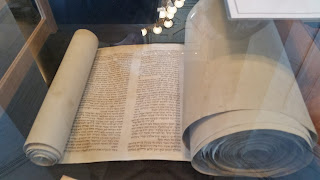 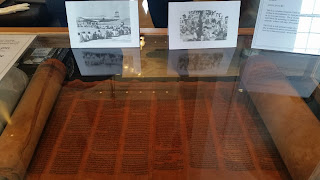 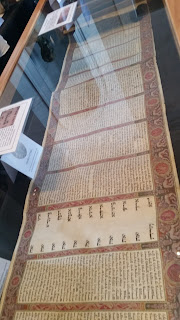 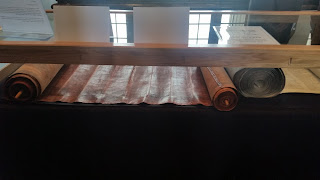 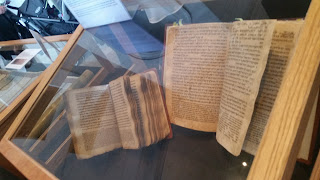