Last night was a BIG night for the Wilson County Fair at the Annual Convention of the Tennessee Association of Fairs.  I was fortunate to be present as Wilson County won 1st Place in the AAA Division which is the highest division.  Not only is the WC Fair a good time for families in Wilson County but it is recognized across the state as the BEST FAIR in Tennessee! 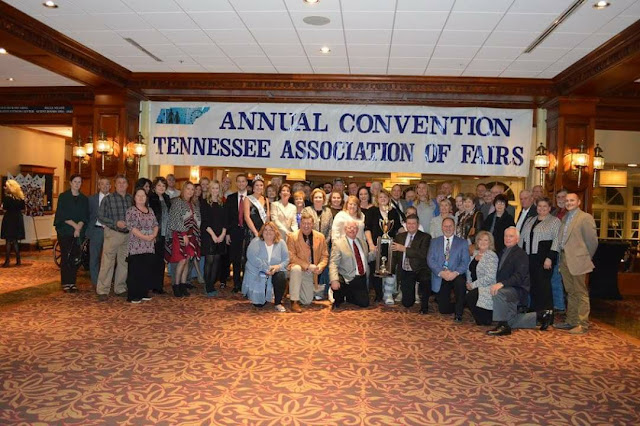 Thank you to the fair board, the more than a thousand volunteers that helped make this possible as well as all of the fair goers and participants!


With the Second Regular Session of the 110th General Assembly now in full swing, lawmakers are busy in Nashville meeting with constituents and colleagues, voting on legislation on the House floor, and working to shepherd their bills through the legislative committee process.


As House business continues at full-speed, Governor Haslam is also working on his legislative agenda, notifying lawmakers he will soon unveil his agenda for the year. On Monday, January 29, lawmakers will hear from the Governor as part of his annual State of the State address to a joint session of the legislature. During this televised speech, the Governor will unveil his full legislative package for 2018, and legislators and the public will receive details about his proposed state budget.


In recent months, media outlets and news organizations across the country have placed Tennessee at the top of several key economic rankings. This important news for the state follows 2017’s historic legislative session that saw the passage of a fiscally conservative $37 billion balanced budget that cut taxes, placed over $130 million in the state’s Rainy Day Fund, and focused on job recruitment and infrastructure investments.


While many politicians in Washington and around the country continue policies of reckless spending and partisan bickering, lawmakers in Tennessee proudly passed a state budget that exercised fiscal restraint, saved money for the future, and fully-funded the state’s educational priorities.


Because of this stark contrast with the rest of the nation, Tennessee has rapidly climbed the ladder over the last several years as one of the overall best-managed states in the nation. Coupled with the fact that Tennessee is one of only a handful of states with a higher bond rating than that of the federal government — a major indicator that showcases our state’s stable fiscal environment — it is easy to see why so many are looking to Tennessee for economic guidance.


Awards for the most recent round of rankings for the state include:


·       Being named the 3rd best state in the nation for business by Business Facilities Magazine;


·       Ranking 2nd in the country for transportation/road quality and 2nd in cost of living by CNBC;


These accolades are in addition to the other accomplishments Republican lawmakers have achieved since 2011, including cutting more than $800 million in taxes over the last 7 years, the lowest unemployment rate in state history, and education advancements that have led to the fastest improving student test scores in the entire country.


There is no doubt that in Tennessee, things are moving in the right direction. Through a strong partnership of the General Assembly’s Republican majority and the work of Governor Bill Haslam, Tennessee has been successful in attracting job-creators, inspiring entrepreneurs, and putting people back to work. While Washington and many states around the country are struggling to come together, Tennessee is truly doing things the right way.


As another example of the upward swing in Tennessee’s economy, there have been numerous major business expansions announced by the Tennessee Department of Economic and Community Development and House Republicans recently. Over the last few months, dozens of companies, both from within the state and from other parts of the country, have decided to expand their operations in Tennessee. With these expansion projects, thousands of jobs will be created along with millions of dollars invested into local communities.


Some of the most prominent of the recently announced expansions include:


For more information about these expansions and to view other industry announcements from across the state, visit the Tennessee Department of Economic and Community Development website at www.tn.gov/ecd.


We have seen incredible achievements from our students and educators in this past year.  The Tennessee Commissioner of Education recently highlighted many in a blog post.  A few of our most notable moments include:


·       Our average ACT score reached 20.1, our highest average with even more students taking the test.


·       Students showed across-the-board growth in the second year of high school results on TNReady, and we set a new baseline for all students to grow with the first full year of TNReady implementation for grades 3-8.


·       More than 8,000 rising first through third graders participated in tuition-free Read to be Ready summer camps across most Tennessee school districts, and they showed statistically significant gains in critical reading skills and increased motivation to read.


·       Tennessee showed historic increases in students taking and getting college credit for Advanced Placement courses, which supports a seamless transition into postsecondary.


·       Tennessee’s ESSA plan to transition to the new federal law was approved and recognized as a top-ranked plan in independent reviews.


Additionally, in December, Stanford researchers published new data that looks at the growth students in grades 3-8 showed from 2009-2015 in a unique district-level approach. As numerous news outlets have now reported (like here and here), Tennessee’s progress literally stands out.


Please visit the General Assembly's award winning website to keep up with legislation.  We plan on adjourning the second week of April which means we have a lot of work ahead of us.  Each week I plan to focus on a different aspect of the website.  This week it is the Legislator tab.  Hover over the tab and see the links to the Senate Home Page and Members, the House Home Page and Members and a link to Find My Legislator.


Out of Session this year I totally revamped my website.  Just as my former site, it is filled with an abundance of information.  However, I want to focus on the Requests link.  Please click this link and explore all that my office offers you in the way of constituent requests - including a flag to honor your veteran.


Yesterday, I had the privilege to honor a local veteran, Michael Gladstone, on the occasion of his 75th birthday at his beautiful home in Providence.  I delivered two flags, a U.S. and a Tennessee, with a beautiful signed certificate from the Governor. 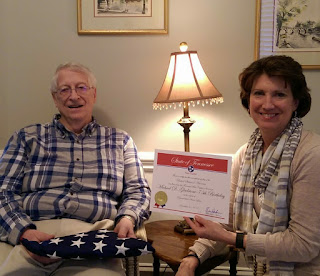 The Passing of Bob Pope


On a sad note, I need to recognize the passing of our friend Bob Pope last week.  Bob was a faithful patriot in the fight for Second Amendment rights. His impact on Tennessee will long be realized by all law-abiding gun owners.  Rest in peace Bob.